So last blogpost I was showing how I was attempting to connect foundation to frames for my second storey. Utter fail. Here's the story so far....

Over the past few days I have been noticing that my girls have been removing undeveloped pupae from the hive. I was concerned and unsure of what the problem (if any) may be. I contacted a few online bee forums that I have joined and found out that this is normal cleaning behaviour.... OR it could mean disease!! Ark!! 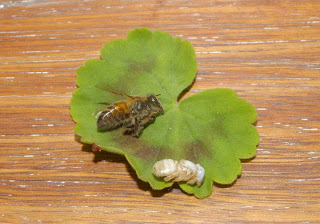 One of the many facebook bee pages responded to my questions about this pupae removal by suggesting that either the bees are removing pupae because of the changes in temperature and conditions (fairly typical of Melbourne weather) OR it might bee a disease called chalkbrood. Chalkbrood is a fungal disease. As a cell Biologist I was immediately suspicious. Fungus? In Melbourne summer? Unlikely.... fungus needs damp humid conditions to survive. Also the removed infected pupae are called "mummies" because they are encased in a white fungal growth that makes them look like a miniature mummy. As you can see, my removed pupae are not mummified.

However I did check my hive today to make sure. A bit of a disaster on one level and a relief on another. The relief being that my colony is disease free... even though I couldn't see my Queen, despite some good advice on how to find her from Mil. The disaster was that the foundation that I had set up last week had completely collapsed within the second story. So I eat my words... the technique that I used was not sound. I think that my second attempt will involve a soldering iron borrowed from Sir's work. However the good news, despite this disaster was that my girls had not yet started to build on the new wobbly foundation, so all is well. In fact, I have some time up my sleeve to make these new frames as the colony are still working on 6 of 8 frames.

This hive opening was quite different to the last few. The girls were not as happy with my inspection as they had been before and they were letting me know. Bees have two sets of wings, usually hooked together form normal flight. However when agitated they are able to unhook them and their happy buzzing becomes an annoyed clacking. About five were zigzaging around my head, clacking and releasing a pheromone that fills the airspace with a warning signal. Quite an experience!! I removed the second super quickly and placed the frames in a beeproof box to deal with later. Then I quickly closed up the hive and left the girls to bee for now.

My next project will be to reattach the foundation and add the second story again. Stay tuned!!